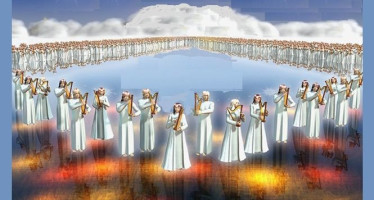 Tribulation period described from ch’s 6-19…a time of great judgment, as God pours out His judgment and wrath upon the Christ-rejecters.

Series of 7’s/seals/trumpets/vials, bowls of wrath

v. 7  …contained in these golden bowls

John has already seen the 7 seals opened, heard 7 trumpet judgments…but the worst is yet to come in these bowls! (ch. 16)

Thus far, most of the judgments have come by natural means, earthquakes, wars, etc…but now they start falling from God above Himself!

Don’t miss this bit of depth, then we’ll get practical:

Ch. 15 is an introduction to the 7 bowls of wrath/lays foundation for them/all that happens in ch. 15 happens in heaven/still during the tribulation/from a different location, perspective…

Here we get a glimpse of glory, and it is very interesting…

Sea of glass, what is it?  Not an ocean, don’t think of a literal sea, but think of a round laver, or a wash basin. (let me explain)

2 articles of furniture exist just outside the temple:  the brazen altar, the brazen (brass) laver.

After the priest offers a sacrifice on that altar, he steps up to the laver to wash up before entering the holy place.

Sounds like what we see in Rev. 15, not an ocean, but the brazen laver outside the temple in the courtyard!

Eph. 5: 26 That he might sanctify and cleanse it with the washing of water by the word,

The laver represented cleansing…the priest had to do this before entering in/thus he gave us a picture of how we are to approach God in worship correctly/the laver was made out of polished brass…a mirror in those days, and like water, mirrors are a Bible picture of the Word (I Cor. 13…a glass, darkly)

Now, look at v. 2:   these saints are standing on the Word, symbolic of the victory they have won by the Word! (God’s Word stands…(forever O Lord, thy Word is settled in heaven!)…aren’t you glad you’re part of a Bible believing church?!

“fire”=a symbol of testing in scripture

Describes these to a “T”…these who refused to take the mark of the beast!  They may have been persecuted, starved, tortured, and lost their heads for it, but they awoke immediately standing on the Word of God, praising the Name of God, holding the harps of God…this is a verse of victory!  And we’ll be there to see it live, w/ our own eyes!

That was a little deep, so what can we apply/make relevant to us tonite?

3 Lessons to learn from this:

The message of the laver is sanctification (altar=justification)…He wants to use us, but won’t use a dirty vessel (glove)

Ill.—bachelor lived alone, not too cleanly, wanted to cook something, opened a recipe which said:  “take a clean frying pan…”

Well, that leaves me out! (couldn’t find one!)

I wonder if God feels that way sometimes (He WANTS to do so much here!)

We cannot expect God to use us while we harbor sin!

People come to church having not read the Bible hardly at all that week, not prayed a lick, stay up late sat. nite watching a movie w/ sinful content, drag themselves out Sunday morning and sit there saying, I just don’t get much out of church! (Moses Himself couldn’t bless them!)

What if we all came together excited, w/ expectancy, having been w/ God already that day/week…and we didn’t need woke up, entertained, etc…we’d have an incredible service!

The laver is our first lesson, daily cleansing.

And fear not them which kill the body, but are not able to kill the soul: but rather fear him which is able to destroy both soul and body in hell.

These trib. saints say, we won’t bow to the antichrist…we’d rather die…and they will die for their faith/we won’t take the mark, death first!

Like Shadrach, Meshach, Abednego (my shack, your shack, and a bungalow)

“Our God will deliver us, but if not, we’ll die for our faith!”

If you’re not saved, consider there’s something worse than even death!

Do you have a faith you’re willing to die for?  If so, you’ll be living for it!

Lesson of the laver/some things are worse than death/…

Not always in this life, but in the next life!

These are standing on a crystal sea, praising God, holding the harps of God…these are the winners, escaping tribulation and hell for all eternity!

Ted Turner said we’re losers and bozos who need a crutch, but this Bible says we win!