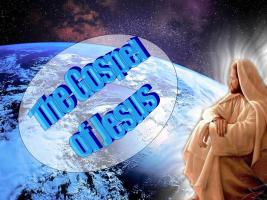 The virus is everywhere.  Some say it’s an epidemic.  I believe it is a pandemic, all over the globe.  This virus kills!  People are wearing masks all over the place.  Some say, “No problem here…that’s other people.”  The Bible disagrees.  The deadly virus to which I am referring is sin and Romans 3 says “All have”…it!  Take off the mask…this means you!

I know the cure:  Jesus Christ!  My vaccine was pulled directly from His bloodstream!  How many here have been cured?

Meanwhile in China…another virus.  Pandemonium near the epicenter.  Looters have been stealing anything they can.  They even broke into a local police precinct and of all things, they stole all their toilets.  Police said they don't expect to find the looters because they 'have nothing to go on.'  [Seriously, we need to pray about the Coronavirus, but how much more concern should we have about humanity’s sin-sick state?]

In our text there's only one follower of Jesus, but he finds someone who found someone, and they each brought someone to Jesus, who in turn did the same.  [read text]

Each and every believer is different, and the way they came to Jesus is unique from how another was reached.  But all have these fundamental things in common.

1.     I have violated God's standard of perfection.  I am a sinner.  Rom. 3:23  "I'm not a BAD sinner."  The Bible says nothing about degrees of sin.  One sin disqualifies us all from heaven.  One weak link in the chain.

2.     I deserve spiritual death in hell.  Rom. 6:23  Sin must be paid for. Justice must be done.  God's perfection and holiness demand justice.

Ill.—3 guys try to run and jump over the Grand Canyon.  One is out of shape guy, one is average guy, and one is athlete guy.  How many plunge to their death?  All!  All come short of the kingdom!

ill.--imagine you are guilty of a crime and stand before a judge for sentencing.  You begin to say, "You have no idea how many good things I have done."  He will say, "That has nothing to do with your crime.  I'm glad to hear you are otherwise a good person.  Maybe we can arrange to get you a certificate to hang on the wall in your jail cell."

And any certificates that people could take to hell with them would burn up...they are just fig leaves with which they tried to cover the nakedness of their true shame.

Mankind today continues to try to pull themselves up by their own bootstraps.  We don't need a boost from beneath, but a birth from above!

4.     Only Jesus can save me.  He's not just one way to heaven...He's the only way.  You go God's way or you don't go at all!  There’s not many different ways to heaven, there’s one way, and when you realize how sinful we all are we shouldn’t be amazed that there’s only one way but that there’s ANY WAY!

Being a good person doesn’t make you a Christian.

Being baptized doesn’t make you a Christian.

Giving an offering doesn’t make you a Christian.

Going to church doesn’t make you a Christian any more than going into Taco Bell makes you a chalupa!

Billy Sunday:  "A cat may have kittens in an oven but that don't make 'em biscuits."

Faith is only as good as its object.

All conversions have these things in common.  But the circumstances which lead up to our conversion is unique.  5 different people come to Jesus in our passage.

How People Come to Jesus:

John the Baptist has two followers of his own in v. 35.  Andrew, and John, the writer of this gospel…who never calls himself John, but 'the other disciple' or 'the disciple whom Jesus loved.'  As they walked, Jesus walked by, and v. 36-37 shows what happened.  They left John the Baptist and followed Jesus, and immediately began seeking out others!  Andrew found his brother Peter.  Jesus found Philip, and Philip found Nathanael.  Suddenly we have 5 following Jesus.  Each made a personal, individual decision.

We would like to see people saved in masses in a coliseum or over a TV broadcast or online, but actually people come to Jesus one at a time, as each one is reached by one.  It's truly the Bible way!  Raise your hand if you were reached by the personal efforts of someone.

Now you may have been saved at the same time as others, but not because you were following them, but because you made an individual, personal decision of your own.

"Well, I've ALWAYS been a Christian."  No!  You must at some point follow the formula above.  When did you realize you were a sinner, and that your sins had to be paid for, and that Jesus paid for them, and you then received Him and His gift of eternal life?

John and Andrew left John the Baptist...ditched him right then and there when they followed Jesus.  And John the Baptist was thrilled.  His ministry was not about building up himself, or building his own kingdom.

In 3:30 he said "Jesus must increase and I must decrease."  He and Jesus were a part of the same movement, but John realized that the movement had one leader, and he fell into place as one of Jesus' followers.

It matters not what accolades I receive or notoriety I attain, if I don't use that to point people to Jesus...if I instead become a self-promoter...then I am building a temporary structure which will soon crumble.

ill.--Adoniram Judson, father of modern day missions, went to Burma, where he was immediately imprisoned, tortured, and starved nearly to death.  In that prison, in between torture sessions, he translated the Bible into Burmese.  Upon his release he quickly reached 1,100 people, and went on to his legendary fame.  33 years later he returned to America for the first time to a royal reception...people lined the port, chanting his name.  As his ship pulled into that port, his colleague saw tears in his eyes and asked him why he was crying.  He said, "I do not want them to cheer for me, but for Jesus!"

Are we trying to make a name for ourselves?  We're missing the boat!  We must be consumed with making much of Jesus!

ill.--When you find a great deal at a store, you tell others.  That gospel of good news spreads fast!  If you find a cure for your ailment, you tell others who are suffering.  That good word quickly makes the circuit!  You want to share it, especially with those you love.

And we have something far grander and more glorious.  We have been healed from sin sickness!

Public preaching of the gospel is a privilege, but it's not as effective as one on one personal soulwinning.

ill.--We refill water bottles from our fridge door, and it takes a painfully long time, because we can go through at least a dozen or more each day. [chug!]  What if I could just line them all up and dump buckets full of water from above?  Some would get a little inside, some would get knocked over, and there would be a mess to clean up.  The only way to get the job done is one at a time.  So it is with preaching.  I unload the truck and some feel dumped on and there's a mess to clean up, and hopefully something actually makes it inside some heads.

Many of you attended church for a long time, and heard sermon after sermon, but it was when someone sat down in your home that you were saved!

Eureka means:  "I found it!"  It's why they would scream it during the California gold rush.  It's a term of excitement and jubilation.  It's a happy word.  This is why my wife says it is a terrible name for a vacuum!

When it comes to witnessing to someone, an ounce of enthusiasm beats a pound of head knowledge.  Why should they want what you've got, otherwise?

You don't have to have more head knowledge to start witnessing...you simply must share what you know.  You are called to be a witness, not a prosecutor.  You aren't going to convince them simply by making a case against them...let them see the truth in your eyes, in your life, and yes, in your voice!

We're all afraid of making a mistake...so instead we make the mistake of not trying.

v. 45        Philip made a mistake.  Do you see it?  Is Jesus the son of Joseph?  If you think about it, it's actually a doozie of a blunder.  But did that mess up the whole deal?  Nathanael still got saved!

You don’t have to be an expert.  Just tell what you know.  Open your mouth and God will fill it!  Start talking and the Spirit does the rest.

A witness is no braver than anyone else…just brave about 10 seconds longer!

Bringing people to Jesus isn't my main job.  It's not just preachers' and missionaries' jobs.  I'm pouring out buckets and most of it misses the mark.  Each one is to reach one.  Find your loved one, your friend, your coworker, your neighbor, a stranger...and put a funnel in their mouth and fill 'er up!