Before There Was Time

1. Before There Was Time.doc
Microsoft Word document [45.5 KB]

1. Before There Was Time-handout.doc
Microsoft Word document [28.5 KB] 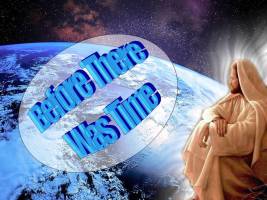 The Gospel of Jesus:  Before There Was Time

God wants our church to go thru the gospels, and to focus more on Jesus…I know this to be a fact!  Christ is the One we should lift up in all we preach.

Gospel means “good news”, and Jesus is the good news!  We’ll use Matthew, Mark, Luke, and John…and yet, this won’t be their gospel we study, but the gospel of Jesus!

Our text today indicates it’s all about Him.  But Matthew begins with Jesus in human form.  Today as we begin this new chronological series we need to see Jesus from the very beginning, though there was no beginning for Him!

And the Word was made flesh, and dwelt among us, (and we beheld his glory, the glory as of the only begotten of the Father,) full of grace and truth.

But Jesus laid aside His glory, not His deity, but the glorious form and the privileges of deity, to become the God-man for us.

But John said he beheld His glory?…well, that was at the transfiguration.  And Jesus Himself said He laid aside His glory:

And now, O Father, glorify thou me with thine own self with the glory which I had with thee before the world was.

Here at the beginning, before time existed, we find Jesus, and the word that comes to mind is glory.  It’s the answer to any questions we may have.  Who is Jesus?  He is Glory.  Where was He?  In Glory!  What was He like?  Glorious!  What does glory look like?  We would die if we saw it unprotected.  Yet, God gives us a glimpse, a portrait…let’s look at it:

For God, who commanded the light to shine out of darkness, hath shined in our hearts, to give the light of the knowledge of the glory of God in the face of Jesus Christ.

What will it be like when you see Him face to face?

Who being the brightness of his glory, and the express image of his person…

He shares His glory w/ the Father, and with someone else…

And the glory which thou gavest me I have given them; that they may be one, even as we are one:

Love existed before time as well, and God is love, and John 3:16 shows how God loves us, though we are sinners…He sent His glory our way!

Love is eternal, it has always been, and always will be.  It wasn’t invented by humans!  Wanna be capable of more love?  Get to know God more!

Who hath saved us, and called us with an holy calling, not according to our works, but according to his own purpose and grace, which was given us in Christ Jesus before the world began,

Jesus has always been the embodiment of grace.  Grace has always existed.  All who are saved are saved by it.  You were born because of it.  Each heartbeat, each breath, each moment, each day, each memory, each bite you take, each laugh you share, each sight you see, each song you sing, each kiss, each face, each touch, each embrace…it’s all because of God’s amazing grace!  There’s no other word for grace but amazing!

We could call our church Grace, for it’s by God’s grace we can be a part of it!

“He giveth more grace when the burdens grow greater

He sendeth more strength when the labors increase

To added affliction He addeth His mercy

His love has no limit, His grace has no measure

His power has no boundary known unto men

For out of His infinite riches in Jesus

Only God could conceive of this wonderful plan to share His glory thru love and grace.

But we speak the wisdom of God in a mystery, even the hidden wisdom, which God ordained before the world unto our glory:

Proverbs is the book of wisdom, and makes it clear that our glorious, loving, graceful Savior is forever the embodiment of wisdom!

The Lord by wisdom hath founded the earth; by understanding hath he established the heavens.

The Lord possessed me in the beginning of his way, before his works of old.

Wisdom is what we lack, but it’s the one thing for which we can pray and the answer is always yes!  James 1:5

In hope of eternal life, which God, that cannot lie, promised before the world began;

Jesus is the promised One, and He keeps His promises!  I don’t have to wonder if I’m still saved.  [Earnest money]

And all that dwell upon the earth shall worship him, whose names are not written in the book of life of the Lamb slain from the foundation of the world.

God is timeless.  He exists in all time periods.  Before there was time He had already decided to die for us on the cross…and so in His ever-existent way had already done it, and is forever still doing it.  No wonder He retains his scars forever in heaven…the only man-made things there…forever a reminder of just how we got there…as the promised Lamb Who made payment for the price of my sins before I even existed to commit them!

world, that we should be holy and without blame before him in love:

Whom has God chosen?  Only the saved?  No, He chose to share His glory with all who would receive it.  God so loved “the world”.  It’s by grace that any can be saved.  But in His wisdom He had foreknowledge from the very beginning which among us would CHOOSE HIM!  We have the choice to claim His promise and accept the sacrificial blood of the Lamb.

But it’s awesome to think that God knew me and you before there was time, and cares enough about all the details, including the choices we would make.  From our perspective, our choices haven’t been made, we all have a free will and a clean slate ahead of us!

The Lord is…not willing that any should perish, but that all should come to repentance.

Anyone can be saved:  “the chosen” are all who will choose Him.  “The elect” are all who elect to receive His salvation.  The called are all who call upon the name of the Lord!

Everything preached so far today is what we know about Christ before there was time…but then, He created time and all that is!

1. HE LAID THE FOUNDATION FOR ALL THAT IS.

And, Thou, Lord, in the beginning hast laid the foundation of the earth; and the heavens are the works of thine hands:

2. NOTHING WAS MADE WITHOUT HIM.

All things were made by him; and without him was not any thing made that was made.

3. BY HIM GOD MADE EVERYTHING.

Hath in these last days spoken unto us by his Son, whom he hath appointed heir of all things, by whom also he made the worlds;

4. ALL WAS CREATED BY HIM AND FOR HIM.

For by him were all things created, that are in heaven, and that are in earth, visible and invisible, whether they be thrones, or dominions, or principalities, or powers: all things were created by him, and for him: And he is before all things, and by him all things consist.

5. HE CREATED ALL THINGS.

…the mystery, which from the beginning of the world hath been hid in God, who created all things by Jesus Christ:

7.  HE IS THE BEGINNING OF CREATION.

And unto the angel of the church of the Laodiceans write; These things saith the Amen, the faithful and true witness, the beginning of the creation of God;

It’s true, friends, the babe in the manger wasn’t the beginning, just the next chapter of Him who is timeless.

He was killed at the hands of sinful mankind, but that wasn’t the end, just the next chapter.

And this verse from Revelation is about the Alpha and Omega, He Who is the beginning and the end, and yet even at the very close of God’s Word, it’s not the end…it’s only the beginning!