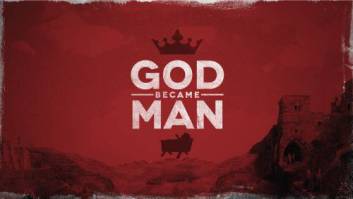 When God Became a Man

Many men have wanted to be God.  Only one God became a man.  His name is Jesus.

The Son of God became the Son of Man, that the sons of men might become sons of God.

King Solomon stood in the lavish temple he had built and said,

1 Kings 8:27
But will God indeed dwell on the earth? behold, the heaven and heaven of heavens cannot contain thee; how much less this house that I have builded?

Notice the last phrase:  the Word WAS God.  That verb is in a tense which means eternal existence.  He always WAS God.  He never BECAME God.  He is the eternally existent one.  Here He is merely revealed to us...that's why #1 is His Revelation.

3 words about His revelation:

What a profound statement.  God Almighty limited His dimensions to that of a human body!  We seem to picture Him w/ an aura around him and a holy halo, but he was flesh and bone, with limbs and hair.  He had internal organs.  He ate and processed food.  He wasn't a phantom spirit.  He who at His core was God was 100% man...God robed in flesh.  He was as much human as we are!

Were all His teeth perfectly straight?  Are yours?  When He was a teenager, did He ever get a zit?  Did He bite His fingernails?  I don't know if they offered manicures in those days, but John emphasizes that Jesus was just like you and me.  He got thirsty and hungry.  He got weary and tired.  [4:6] He had to sleep.  He would wake up.  What would His breath be like?  What do you think?!  Could he get nose hair?  Have you ever seen a Jew?  If he plucked one, I believe His eyes would water.

This sounds almost inappropriate talk...like I'm bringing God down to man's level.  I didn't do it, God did!

John 11 says that He sighed [groaned from within] over the death of a friend, Lazarus, and then He outwardly wept literal tears, just as on the cross He bled literal blood, and His heart stopped and He died...the eternal God died in human form just like we will.  All these things He did just like we do - except to sin - good thing He was human, for He was our substitute!

There's no way we can completely wrap our heads around this truth of God taking on human flesh...this is why it says in…

1 Timothy 3:16
And without controversy great is the mystery of godliness: God was manifest in the flesh...

The OT oft times predicts His coming as God and King, but sometimes as a man, such as:  Isaiah 53:3    He is despised and rejected of men; a man of sorrows...

Isaiah 9:6
For unto us a child is born, unto us a son is given: and the government shall be upon his shoulder: and his name shall be called Wonderful, Counsellor, The mighty God, The everlasting Father, The Prince of Peace.

ill.--in Luke 2 we have the only story from Jesus' childhood.  He wisely answered the questions from the doctors and theologians.  I'm sure one of their questions was, "How old are you?"  This is speculation, but He could have answered, "On my mother's side I'm 12, but on my Father's side I'm much older than my mother and the same age as my Father!  Oh, also, before Abraham was, I am!"  [timeless]

Don't miss this!  "Dwelt" is from the root translated 'tabernacle' [camp], and our minds go back to the OT tabernacle, that portable temple.  Our Lord likes camping!  God had commanded that tabernacle to be built.  So, why would God want it built?  *To picture Christ.  To worship.  But most of all, so that He might dwell [camp] among His people!

God doesn't want to watch from a distance.

Exodus 25:8
And let them make me a sanctuary; that I may dwell among them.

My God is on the scene and highly involved in every aspect of every day, and in this age of grace He not only dwells among us but in us who are saved!  Incarnation means he took on flesh…identification is when he entered mine!

When Christ came to earth He revealed the glory of God!

'Beheld' comes from Greek 'theo-omai' = theatre!  It means to gaze at intently.  The disciples had a front row seat in that theatre.  They saw the curtain rise and the spotlights shone on that lovely face, and they knew they were looking at God!  “We beheld His glory!”

John 2:11
This beginning of miracles did Jesus in Cana of Galilee, and manifested forth his glory; and his disciples believed on him.

It says His miracles manifested His glory!  Today I pray we will see His glory and come to know Him better than ever, because it's not just a theatre production...we get to go backstage and take pictures, get the autograph on our hearts, fellowship and commune with Him, and then He invites us to His house, and after many good times there reveals that His house is OUR house, and He has built it for us forever!

You say, I need to know that God, but I don't know how.

“Made” - Let's talk about creation first of all.  I believe God created all that is, and if there's a big bang, it's still to come, and it will happen to those who reject their Creator!

Let me tell you something right now!  We all believe what we believe by faith...because none of us were there!  I'll admit that I must not have as much faith as those who believe that it all just spontaneously happened.  Fact is, people can believe in whatever they WANT to believe in, and evolutionists must really want it badly because they actually cast reason aside.  Let's see, what could be their motive?  Could it be so that they don't have to admit there's a God?  Could it be so they don't have to answer to Him for their sin?

2 Peter 3:5
For this they willingly are ignorant of, that by the word of God the heavens were of old...

Why don't they believe?  Because they don't want to!

What a wonder that the creation rejects their Creator.

OT prophecies pointed to Him.  Jesus fulfilled 330 direct prophecies.  They beheld His glory and His miraculous works.  They saw the light, but they put that Light out.

Israel was not just ignorant.  They were willfully ignorant.  Why did they not believe?  They didn't want to!  And when you don't want to believe, no amount of evidence will convince you.

Jesus gave them every opportunity to come to the truth.

Jesus is the way, but they WOULD NOT walk with Him.

Jesus is the truth, but they WOULD NOT believe Him.

Jesus is the life, and they crucified Him!

Why did Israel reject Jesus?  They wanted to.

Why do sinners reject Him today?

John 3:19
And this is the condemnation, that light is come into the world, and men loved darkness rather than light, because their deeds were evil.

What is the opposite of truth?  Not error.  In the Bible, the opposite of truth is sin.  Error is the baggage that comes with your sin.  In other words, people reject the truth, not because they believe a lie, but because there's a lifestyle they want to validate, making it ok.  Error is just the baggage that comes with that sin.

Our universities today tell young people, "You are not a creation of God, you are the result of a random accident."  That sounds stupid...at first glance it looks like a liberal lie.  And yet that really resonates with a person who has lots of temptation in their life...it strikes a chord and they like what they hear, because it lets them live how they want.  "There's no God, and no accountability.  I came from an animal, and I should satisfy my animal instincts!"

Romans 1:18-19
18 For the wrath of God is revealed from heaven against all ungodliness and unrighteousness of men, who hold the truth in unrighteousness;
19 Because that which may be known of God is manifest in them; for God hath shewed it unto them.

It's willful ignorance in order to justify a lifestyle.

Receiving Christ -- it's not the same as:

Joining a church, being baptized/confirmed, living a good life.

Receiving Christ is admitting you are a sinner in need of a Savior, and that Jesus is that Savior who lived a sinless life for you, died a sacrificial death in your place, and rose again, conquering death in your stead so you can too if you receive Him and His gift of eternal life.

Do you want Jesus?  You can be assured that He wants you.  He said that 'Him that cometh to me I will in no wise cast out.'