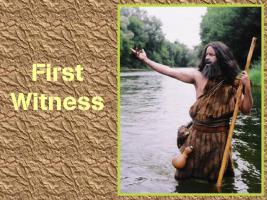 A witness is to tell the truth that he knows.  He testifies before God and everyone the truth.  Jesus is God, and I can prove it.  I call to the stand John the Baptist!

John the Baptist was a relative of Jesus.  Their mothers, Mary and Elizabeth were cousins.  John was 6 months older than Jesus, and they probably knew one another and played together when they were young.  John is mentioned 89 times in Scripture.  He introduced Jesus as the Messiah to his people.

He is called the forerunner, and the voice of one crying in the wilderness.

He would be imprisoned and martyred for his bold preaching.  John had the boldness to confront Herod when he stole his brother, Phillip's, wife, Herodias.

His greatest endorsement came from Jesus...

Luke 7:28
For I say unto you, Among those that are born of women there is not a greater prophet than John the Baptist:

Nike can endorse athletes...I'd prefer the endorsement of the Lord! [Deblasio endorsed Bernie!  Yeah, hitch your wagon to that star!]

John's message was Repent, for the kingdom of heaven is at hand!  Why?  It was dark days for Israel, spiritually, when Christ came.  They hadn't had a prophet in 400 years.  God had been silent.  Their spiritual leaders had gone corrupt.  King Herod [the great] was a tyrant with 9 wives.  When he didn't care for a wife he would have her executed.  You didn't want to burn the biscuits in that house!

America is in dark days as well, and repent is the message we need to send out as well.  Instead, we have feel good messages, and preachers patting us on the back, telling us we are good and how we can prosper and enhance our lifestyle.  We need bold preachers like John the Baptist who will preach repentance!  Because Jesus is coming soon...the kingdom of heaven is at hand just as it was in John's day.

Repent = to turn around.  A change of mind which leads to a change of action.  And John said that if you have truly repented, there would be two evidences:  Baptism and a changed life.  John's message was--Don't make this salvation decision if you're not gonna back it up and follow thru and live the life!

John was a man sent from God to be a witness.  "Witness" is used 47 times in this gospel, and is a key concept.  A witness is someone who tells what they have seen, heard, or experienced.

joke--a man was accused of biting another man's ear off.  There was only one witness and he was a major redneck who didn't even arrive on the scene until it was over.  The young defense attorney for the accused said, I've only got to tear down this bumpkin's credibility and my client will walk free!  He called the redneck to the stand.  "Were you there when the argument started?"  "No."  "Were you present when it became a fight?"  "No, I just arrived on the scene when it was all over."  "So, you weren't present when the defendant allegedly bit this man's ear off?"  The man hung his head and admitted, "No, I wasn't".  The cocky, young attorney strutted back to his seat and said, "I rest my case."  Just then the redneck leaned into the microphone and said, "But I was there when he spit it out!"

A witness is someone who knows something, and then can share it with someone else.

The Bible says you and I are to be witnesses.  We have seen, heard, and experienced, and we must share.

Acts 1:8
But ye shall receive power, after that the Holy Ghost is come upon you: and ye shall be witnesses unto me both in Jerusalem, and in all Judaea, and in Samaria, and unto the uttermost part of the earth.

'preferred before me' = He is greater than I am...look at Him, not me.

'He was before me' doesn't mean chronological age, since Jesus was a few months younger.  This is a reference to His eternal nature.

This is important because Satan's primary goal is to undermine the person of Jesus Christ.  Cults start when someone denies Jesus' Godhood.

We don't bash other churches, but I do reserve the right to quote them...

In "Let God be True", p. 33 they say, "Thus he [Jesus] is ranked in God's creation, being first among them...he is not the author...but after God created him, God made him his partner."  This means Jesus is not eternal and not part of the Godhead.

Mormons try to have it both ways.  They say Jesus is 'a' God, but not 'the' God.  They claim the Bible as well as other books.  And they end up in a salvation which is by good works, not by the work of Christ on the cross.

All religions cannot be equally true.  They are mutually exclusive. We can't all be right.  I believe John's witness.

A man is known by 5 things:

Apply these standards to Jesus and you quickly realize he was no ordinary man.

Jesus' character was flawless...He had all the fruit of the Spirit all of the time.  Who else can you say that about?

Jesus' conversation:  Even His enemies said never a man spake as He.  All were astonished at the powerful things He said.  And His words have resonated for 2,000 years, changing lives.

Jesus' conduct:  Even His enemies admitted He was perfect and sinless in the end.

Jesus' contributions:  He gives hope to the hopeless, sight to the blind, and to a lame man that asked for alms Jesus gave legs!  What's more, He gives eternal life to all who believe on Him!

Jesus' creed:  He claimed to be the eternal, pre-existent Son of God, and proved it when He rose from the dead!

Truth says if you sin, you die...and the wages of sin is death.  But grace says, I will die in your place, and take your wages for you.  Jesus fulfilled both grace and truth by dying in our place.

'Grace without truth would be deceitful.  Truth without grace would be condemning.'  W. Wiersbe

ill.--a cross is two perpendicular lines which come together.  This line meets this line.  And Jesus' cross is where grace met truth!

When Jesus paid our sin debt, the demands of truth were satisfied, so now God is free to extend His grace.

John 2 tells of a wedding in Cana, but the first marriage in this book is in chapter 1, the marriage of grace and truth!

ill.--an adulteress was brought to Jesus, and Jesus ran off her accusers, and said, I don't condemn you [that's grace]...then He said, Go and sin no more [truth of repentance!]

Colossians 1:14-15
14 In whom we have redemption through his blood, even the forgiveness of sins:
15 Who is the image of the invisible God, the firstborn of every creature:

How many like to do jigsaw puzzles?  Me either!

This week I needed to reach Bro. Chris by phone, but when I called his wife said he couldn't come to the phone because he's putting a jigsaw puzzle together.  I tried the next day, same answer.  He didn't go to work or leave the house…same reason.  This went on all week.  Finally this morning I saw him and he said it was finished.  "What took so long?"  He said, "Actually, that's faster than average...the side of the box says from 2-4 years!"

John the Baptist was a puzzle to the religious leaders of his day...they could not figure him out.  So they asked him a series of questions.

It was obvious that he was unusual, and had a spiritual authority about him.  Their real question was:  "Are you the Messiah we've been waiting for?"

They knew from the OT that he never died, but was caught up to heaven alive.  The Jews expected that perhaps one day Elijah would come back.

Next, John refers them to the OT prophecies about the forerunner, which is him!

Malachi 3:1
Behold, I will send my messenger, and he shall prepare the way before me: and the Lord, whom ye seek, shall suddenly come to his temple…

Still puzzled, they ask another question:

v. 26, 33  God sent me to baptize with water, but there's a more important baptism which I cannot perform.

One day the religious leaders asked Jesus where He got HIS authority.  He answered with a question:

The answer, clearly, was from heaven!

John was called a voice crying in the wilderness, because not many in his day were listening.  Sound familiar?

Not many believed his claims, but they were wrong.  And not many may believe your testimony of Christ, but they are wrong.  Don't YOU be wrong by letting that influence you to quiet down.  Be a voice crying in the wilderness!

We can all hear what we're looking for.  You can give a child instruction to clean up and they tune you out.  But whisper the word candy and their ears pop up!  They couldn't hear John, but it wasn't because they had no ears, but because they weren't listening.

ill.--a zoologist specialized in insects, and could hear them over city traffic.  A friend was intrigued and said, watch this, and flipped a coin onto the sidewalk and it made that distinct sound of money hitting the ground, and everyone around turned their head!

If you came to church to listen to God, you'll hear from Him today!  And if you're listening for things of this world, your mind will block out all but thoughts of the world.

Jesus Christ is the Son of God.

v. 34                John grew up with Jesus, just 6 months older that Him.  Somehow God had revealed to John that one day he would baptize a man and the Spirit would light on Him like a dove, and that would be the Messiah, the Son of God!

Begotten = unique, one of a kind.  He was only begotten in a sense of birth in that He was born on earth but conceived from His Heavenly Father.

Jewish Law stated that in the mouth of 2 or 3 witnesses a thing is established as fact.  John lays out 6 witnesses to Jesus being the Son of God.

You know who else believed?  The demons of hell!

Mark 3:11
And unclean spirits, when they saw him, fell down before him, and cried, saying, Thou art the Son of God.

A man with an experience is never at the mercy of a man with an argument.  I know He's real!  I have evidence, inward and outward.

ill.--I take a bite of cake, and you walk up and say it's no good.  I just smile and chew and swallow.  I know it's good no matter what you say.  I have evidence, and it is IN me!