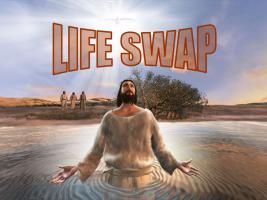 Jesus existed before there was time.  He is on every page of the OT.  He stepped into time and took on flesh in the manger.  We see Him at age 12 in…

And the child grew, and waxed strong in spirit, filled with wisdom: and the grace of God was upon him.

And Jesus increased in wisdom and stature, and in favour with God and man.

Much of Jesus’ childhood and even young adult years we can only imagine.  His official ministry didn’t begin until He was about 30 years of age.  Until then, He was a carpenter by trade, a student of the Word…spiritually preparing for the big tasks ahead.

Now a career change is in order...a life swap!  Jesus moves from the training of His earthly father to the business of His Heavenly Father.  He’ll trade in His woodworking tools and become a rebuilder of human hearts, as He carves out a way of escape for hell-bound mankind.

Visualize Jesus as He, knowing it is time to begin working full time for His Father God, stands in his stepfather’s woodworking shop for the final time. Can you see Him sweeping up the wood shavings on the floor for the last time? Can you see Him standing the broom by the doorway and looking back? Can you smell the cedar and sawdust?

What memories must have flooded his mind? Perhaps memories of Joseph wrapping his huge hands around the tiny hands of a small boy, anxious to learn how to use a saw, pound a hammer, plane a piece of wood. Or, memories of conversations with Joseph as they shared their sack lunches…laughter, and good times. Possibly the reminder of His dad saying, "Good job on that table top, Jesus."

Now it’s time to begin a 42-month journey that will end in death on a cross. He has known it all along.  I wonder if in that carpenter shop, the hammer and large nails caught his eye? I wonder if he rolled a spike between His thumb and fingers, anticipating the pain.

So many memories of such a tranquil life--this had been a world where typical problems were getting a board squared up or keeping a saw sharpened. Problems weren’t so eternal in their consequences. At the end of the day you had closure - a completed cabinet, a repaired door. You could go to bed at night feeling successful because "It is finished."

But now his hour has come. It’s time to enter a world where the problems weigh with an infinite gravity - a world where there is little closure.  Now it’s a new, tough job to focus upon…a world where people will be changed by walking in His footsteps.

Jesus’ first journey out of the carpenter’s shop will be a 15-mile journey to the rim of the Jordan Valley. There, standing waist deep in the water is a man whose outfit, if he bent over to drink, would make him look like a small camel.  John is his name, but he is not the writer of this gospel.  He is an intense man, busy with preaching and baptizing. He is focused on preparing the road for the king by admonishing men to repent of their religious misdirection that has led them to the false believe they can be saved by keeping the law or by doing good works.

When this bold, uncompromising preacher, John the Baptist, sees Jesus, he acquiesces, suggesting Jesus baptize him. But Jesus has come to model what God wants from men. And the beginning point of a man’s healthy relationship with God is in humbly submitting to God’s command that he be baptized. Baptism is only effective if one has repented [for everyone but Christ]. Jesus had nothing to repent of, but He still modeled something for us by being baptized. Baptism for Jesus was the beginning of His humiliation for our sakes. A sinless king is baptized. The only perfect One will bear our sins on the cross. Isaiah said He would be numbered with the transgressors. His baptism says He is a king who totally identifies with his people. It was the beginning of Jesus’ bearing our iniquities. It would all consummate in what he called the "baptism I must be baptized with" [lk. 12:50], the complete immersion into the penalty for sin, death on the cross.  That cruel tree was grown by Him…and was much like the raw material He would turn into beautiful furniture or sturdy structures.  But on this tree would hang nothing beautiful, but a mangled Savior, unrecognizable as a man, drenched in my sins and yours.

God affirms the sacrificial nature of Jesus’ life when He has the classic poor man’s sacrifice, a dove, light on Jesus immediately following his baptism.

At his birth, he stepped from heaven to take on our flesh. At his baptism he waded out into the water to stand with us in our sinfulness.

As Jesus is baptized, listen. Do you hear it? Do you hear the soft flutter of God’s Spirit settling on Jesus’ shoulders?

Why was His Father so pleased? Maybe it was for the same pleasure Joseph had when he saw the young Jesus standing next to him in the shop, mimicking his every move as he worked the wood with his hands. Though the young boy has not made anything of His own, He was so eager to learn and so willing to work. He was so attentive to His father’s voice and so submissive to his instructions.

It was on His baptismal day that Jesus left Joseph’s wood working business and went to work for His real Father, full time. This is His real business now!  From now on He will hang on his Father’s every word. Every decision, every thought will be carried out with concern for the Father’s will. The driving force of His life will be the question, "Will this glorify my Father?" What father wouldn’t be pleased with a son like that?

The purpose of our baptism is to publicly announce that a child has been born into the family of God.  It’s a life swap!  And Jesus was the fulfillment of the prophecy that a Holy Child would be born and so the purpose of John’s baptism was that Jesus Christ should be announced as the Messiah.

…that he should be made manifest to Israel, therefore am I come baptizing with water.

Heb. 4:15   For we have not an high priest which cannot be touched with the feeling of our infirmities; but was in all points tempted like as we are, yet without sin.

2 Cor. 8:9   For ye know the grace of our Lord Jesus Christ, that, though he was rich, yet for your sakes he became poor, that ye through his poverty might be rich. [2 way Life swap! Joint heirs/Child of the King!]

Isa. 53:12   Therefore will I divide him a portion with the great, and he shall divide the spoil with the strong; because he hath poured out his soul unto death: and he was numbered with the transgressors; and he bare the sin of many, and made intercession for the transgressors.

And Jesus, when he was baptized, went up straightway out of the water: and, lo, the heavens were opened unto him, and he saw the Spirit of God descending like a dove, and lighting upon him:

That he “went up straightway out of the water,” indicates that his baptism was an IMMERSION. The eunuch and Philip “went down both into the water” (Acts 8:38), and Philip baptized the eunuch. “Baptism” is the Greek word “baptizo” transliterated into English. Baptizo means to dip, immerse, or cover completely.  [plunging under, not pouring on]

This was the anointing of the Lord Jesus Christ “with the Holy Ghost and with power” for his earthly ministry.  [Life swap]

That word, I say, ye know, which was published throughout all Judaea, and began from Galilee, after the baptism which John preached; How God anointed Jesus of Nazareth with the Holy Ghost and with power…

The gospels record the voice of the Father from heaven THREE times.

While he yet spake, behold, a bright cloud overshadowed them: and behold a voice out of the cloud, which said, This is my beloved Son, in whom I am well pleased; hear ye him.

Father, glorify thy name. Then came there a voice from heaven, saying, I have both glorified it, and will glorify it again.

Have you heard God’s voice?  What would He have to say about your life?  Is it time for a ‘life swap?’  Do you hear His voice calling out to you, wanting you to start a new chapter of your life for Him?  It’s time for many in our church to step up to the plate, and take on a new level of commitment…to give God ‘Higher Ground’ in your heart!  Come for PM services, learn your spiritual gift and prepare to use it!

If you’ve never been saved, realize Jesus traded places with you.  He wants to trade your sin for his salvation.

“I gave Him my old tattered garments…He gave me a robe of pure white!”